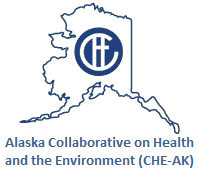 The Alaska Collaborative on Health and the Environment (CHE-Alaska) is a working group of the national Collaborative on Health and the Environment. We hold monthly one-hour teleconference seminars to advance knowledge and effective action to address growing concerns about the links between human health and environmental factors. Our speakers include scientists, health care professionals, policy experts, and community activists who are working on a range of environmental health concerns. Click on the title of any of the calls listed below to go to the call webpage and listen to the recording.

Join our CHE-Alaska email list to be notified of upcoming CHE-Alaska calls and events.

12/09/2015     Why the U.S. Leaves Deadly Chemicals on the Market: A Conversation with Journalist Elizabeth Grossman

10/19/2015     Climate Change and the Release of Contaminants in the Arctic: Current Research and Potential Health Effects

08/05/2015     The Longest Swim: A Journey Across the Pacific to Raise Awareness About Plastic Pollution

07/29/2015    The Myth of Herbicide Safety in Alaska: How Herbicides Threaten the Health of Fish, Wildlife, and People

05/21/2015   International Actions to Protect Health and Environment: A Report from the Stockholm Convention on Persistent Organic Pollutants

04/08/2015   An Introduction to Endocrine-disrupting Chemicals: New Resource on Health Threats Posed by EDCs

02/04/2015   Only One Chance: How Contaminants in our Environment Impair Brain Development