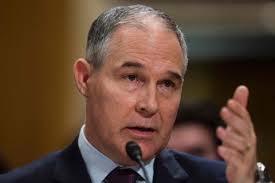 EPA Administrator Scott Pruitt is making good on the President’s promise to dismantle EPA and its protections for American families and workers. He quickly appointed several high-ranking employees of the American Chemistry Council, including Nancy Beck, whom he put in charge of the section responsible for implementing the bi-partisan reforms of our country’s toxic chemicals law passed in 2016 (“Lautenberg Act”).

It comes as no surprise that, under Pruitt and Beck’s leadership, EPA has repudiated  two sets of draft regulations issued under the Obama Administration. The final rules now allow EPA to disregard routes of exposure that would increase the risk of harm, which means more chemicals could be deemed “safe.” The original rules required EPA to consider “all” routes of exposure, as required by the Lautenberg Act.

ACAT and the other plaintiffs are also challenging the final rules that set out how EPA will choose which chemicals it will review on a priority basis.

The net effect of these two weakened rules puts all of us, especially vulnerable populations like pregnant women, infants and children, Alaska Natives, and residents of the Arctic, at greater risk of harm from dangerous chemicals.

Pamela Miller, Executive Director of Alaska Community Action on Toxics, said: “Indigenous peoples of the Arctic are among the most highly exposed populations on earth and extremely vulnerable to health disparities associated with chemical exposures including endocrine and immune system disorders, neurodevelopmental harm, and cancers. Many persistent and toxic chemicals, including HBCD, are subject to long range transport via atmospheric and oceanic currents and concentrate in wildlife and people of the north. EPA has a clear obligation to protect the health of vulnerable populations, including Alaska Native people who rely on the land and sea for their sustenance and culture. Chemical corporations cannot be allowed to continue violating the health, human rights, and integrity of our northern and Arctic communities.”