One-third of women tested had levels of mercury in their bodies at levels that can cause brain damage, IQ loss, and kidney and cardiovascular damage 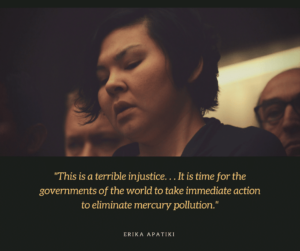 International POPs Elimination Network (IPEN) and Alaska Community Action on Toxics (ACAT) released a new study measuring the prevalence of mercury, a potent neurotoxin, in the bodies of 1,044 women of reproductive age from across the globe – including 33 women from Sivuqaq (St. Lawrence Island).

The scientists found that 36% of women sampled had average mercury levels above the US EPA health advisory level of 1 ppm, above which brain damage, IQ loss, and kidney and cardiovascular damage may occur. The study also found that 55% of the women measured more than 0.58 ppm of mercury, a level associated with the onset of fetal neurological damage.

Results of hair sampling from the communities of Savoonga and Gambell on St. Lawrence Island revealed that 30% of the women who provided samples exceeded the 1 ppm reference level and 70% exceeded the proposed health-based threshold of 0.58 ppm.

Erika Apatiki, a Yupik woman from the Native Village of Gambell on St. Lawrence Island and Community Health Researcher with Alaska Community Action on Toxics, participated in the study. She stated, “I found out that my mercury level is almost twice the US EPA health advisory threshold. This toxic mercury comes from industries that are far away and that pollute our traditional foods. We don’t have the option of buying other foods because they are too expensive. And we shouldn’t have to. This is a terrible injustice. Our traditional foods have sustained us for generations. We must be able to continue this because it is vital for our well-being and culture. It is time for the governments of the world to take immediate action to eliminate mercury pollution.”

There are three predominant causes of mercury pollution: coal-fired power plants (one of the main sources globally that contaminate oceans with mercury that accumulates in fish), artisanal small-scale gold mining (ASGM) and local contaminated sites from various industries releasing mercury to soil, water and air.

The study comes just in time for consideration next week at the first meeting of the parties to the United Nations’ Minamata Convention to reduce mercury pollution and its health impacts.