Working for a Toxics-Free Future: International Efforts to Protect the Arctic from the World’s Most Dangerous Chemicals 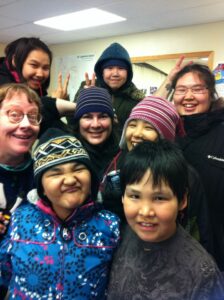 An international panel of experts recently met in Rome to review chemicals being considered for a worldwide ban under the Stockholm Convention on Persistent Organic Pollutants (POPs), the global treaty that banned such chemicals as DDT and PCBs. At this meeting, members of the POPs Review Committee, the scientific review committee of the Stockholm Convention made the important decision to advance certain chemicals towards a global ban, including: pentachlorophenol (PCP) (used as a wood preservative in utility poles), decabromodiphenyl ether (used as a flame retardant in plastics and electronics) and difocol (an organochlorine pesticide chemically related to DDT). PCP, deca, and difocol travel long distances on air and ocean currents, persist in the environment and are known endocrine disruptors. All three chemicals are extremely harmful to human health and can be found in the breast milk and blood serum of people around the world, including Indigenous peoples of the Arctic. Join us for a discussion with international observers Marian Lloyd-Smith and Pamela K. Miller to hear outcomes of the meeting and next steps for assuring a worldwide ban of these harmful chemicals.

Mariann Lloyd-Smith is Senior Advisor to the National Toxics Network and to IPEN,  a global network aiming to eliminate persistent toxic pollutants. Mariann gained her PhD from the Faculty of Law at the University of Technology (UTS), Sydney. Trained as a negotiator in chemical disputes, she has assisted residents with their negotiations over contaminated land and has participated in the international negotiating committees (INCs) for the Stockholm, Rotterdam and Basel Conventions and the Strategic Approach to International Chemical Management (SAICM). Dr Lloyd-Smith, coauthored the NTN report on the chemical impacts of unconventional gas (UG), presenting the findings to governments, communities and industry across Australia, UK and Europe. She is chair of the international working group on UG chemicals and was a member of the UN Expert Group on Climate Change and Chemicals.