Comments on proposed endangerment finding on lead in aviation gas

In October of 2022, the Environmental Protection Agency (EPA) proposed an endangerment finding on leaded aviation gasoline, a critical step to regulate lead pollution from piston-engine aircrafts – the largest source of lead emissions in the country. 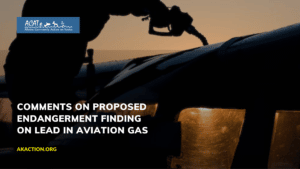 Leaded gasoline in most motor vehicles was banned 25 years ago, but av gas is still used in nearly 170,000 piston-engine aircraft across 20,000 airports. EPA estimates that emissions from these airplanes account for about 70% of lead released into the atmosphere.

There are three sets of comments available to read from:

2. Letter we worked with Earthjustice on as petitioners

3. Comment letter directly from ACAT – includes ACAT preliminary study of lead levels in the topsoil of gardens, parks, and schools within one mile of Merrill Field in Anchorage.

This is not the first petition groups have filed on this issue. In 2006 Friends of the Earth petitioned EPA to initiate an endangerment finding for av gas. In 2012 the agency said it would do so in 2015, but that did not happen. In October of 2022, EPA said it will finish the endangerment finding in 2023.

In this petition, Earthjustice is representing Alaska Community Action on Toxics, Center for Environmental Health, Friends of the Earth, Montgomery-Gibbs Environmental Coalition, and Oregon Aviation Watch. Santa Clara County, in California, represented by its Office of the County Counsel, is also part of the petition.

EPA’s action stem from a petition that community groups, including ACAT, represented by Earthjustice, together with the County of Santa Clara, California and the Town of Middleton, Wisconsin, filed in 2020.

“Alaska has 400 public airports, many in close proximity to Alaska Native communities and in diverse urban communities where children and other residents may be exposed to dangerous levels of lead,” said Pamela Miller, executive director of Alaska Community Action on Toxics. “We applaud Biden’s EPA for approving this petition and encourage the FAA to help us reach a ban on lead in aviation fuel. Preventing lead exposure is an urgent priority and environmental justice obligation that must be promptly addressed.”

Emissions from leaded avgas, used by many piston-engine aircraft, make up over 70% of the lead released into the atmosphere, the largest remaining source of lead emissions. This is a very important issue for us here in Alaska because of the hundreds of airports with planes that use av-gas.

This is a developing story and will be updated accordingly.