Success at the International Stockholm Convention on Persistent Pollutants

Success at the International Stockholm Convention on Persistent Pollutants 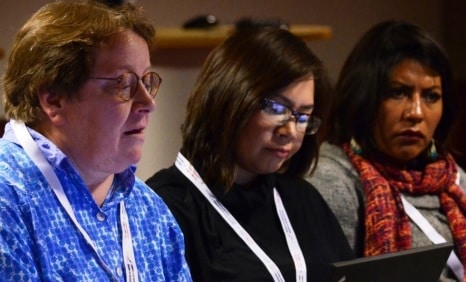 Alaska Community Action on Toxics (ACAT) was instrumental in achieving a major victory in May 2013 with the decision of 179 nations of the Stockholm Convention on Persistent Organic Pollutants (“POPs Treaty”), to institute a global ban on the chemical HBCD (hexabromocyclododecane), a toxic and persistent chemical widely used in building insulation. HBCD is now found in soil, air, water, wildlife, and people around the world, including the Arctic environment and in the blood and breast milk of Arctic Indigenous Peoples. HBCD affects the ability of children to learn and grow because it harms thyroid function and neurodevelopment—with some of the effects being transgenerational.

ACAT sponsored a delegation of four  Arctic Indigenous women to participate in the “Conference of the Parties” of the Stockholm Convention held in Geneva, Switzerland from April 28—May 10. The Stockholm Convention is a global legally binding treaty to address some of the world’s most toxic chemicals. Vi Waghiyi, ACAT’s Environmental Health and Justice Program Director, led the Arctic Indigenous women’s delegation. Pamela Miller, Executive Director, provided scientific information and technical support to the delegation. In addition, as a Steering Committee member of the International POPs Elimination Network (IPEN), a global network of environmental health and justice groups, Pam led the IPEN working group on HBCD and prepared formal interventions on this and other key topics.

Tiffany Immingan (Akaay), a Yupik youth representative from the Native Village of Savoonga, delivered a powerful statement to the Convention plenary session of approximately 1,000 people:

“I am making this statement as an Indigenous Youth from the Arctic on behalf of the Global Indigenous Peoples Caucus. Our caucus represents Indigenous organizations, Nations and peoples from the Arctic, Africa, North America, Latin America and the Pacific regions. Indigenous Peoples continue to bear a burden that they did not create and do not have the capacity to deal with on their own. Indigenous Children and Youth are the most harmed of all. In the Arctic, the level of chemicals contamination in breast milk is amongst the highest of any population on earth. Indigenous children all over the world are harmed by persistent chemicals from conception onwards. Our communities are suffering from high rates of cancers, birth defects, learning and developmental disorders. The chemicals present in our bodies are passed on to Indigenous children and harm their ability to learn our languages, songs, stories, and knowledge.”

Akaay called on the delegates “For the health and well-being of our Indigenous Peoples and all peoples of the earth and our future generations, please support listing of HBCD in Annex A of the Convention with no exemptions.” Akaay’s village is located on St. Lawrence Island in the northern Bering Sea of Arctic Alaska. Her statement received enthusiastic applause from the entire plenary of delegates, a rare occurrence in the otherwise somber deliberations (See related article “Like a Dream”). Read the news release from IPEN: Governments provisionally agree to ban widely-used toxic chemical at UN meeting.

In preparation for the Stockholm Convention Conference of the Parties (COP6), Alaska Community Action on Toxics, International Indian Treaty Council, and Indigenous Information Network facilitated a 1-day training session for Indigenous women from North America, Central America, and Africa to highlight the human rights obligations of the United Nations. The Global Indigenous Women’s Caucus worked at COP6 to educate delegates about the multi-generational health effects of POPs (including in the Arctic) and to include human rights as well as scientific realities from Indigenous communities around the world. At the meeting, the group prepared interventions, participated in regional meetings and contact groups, and informed delegates on health and human rights obligations.

Also in preparation for the Stockholm Convention, ACAT hosted a webinar on April for 30 Indigenous women from throughout Alaska and North America to address how POPs chemicals affect Indigenous women’s health in the Arctic and other regions and to present information on a human rights-based approach to holding the nations accountable to phase out harmful chemicals.