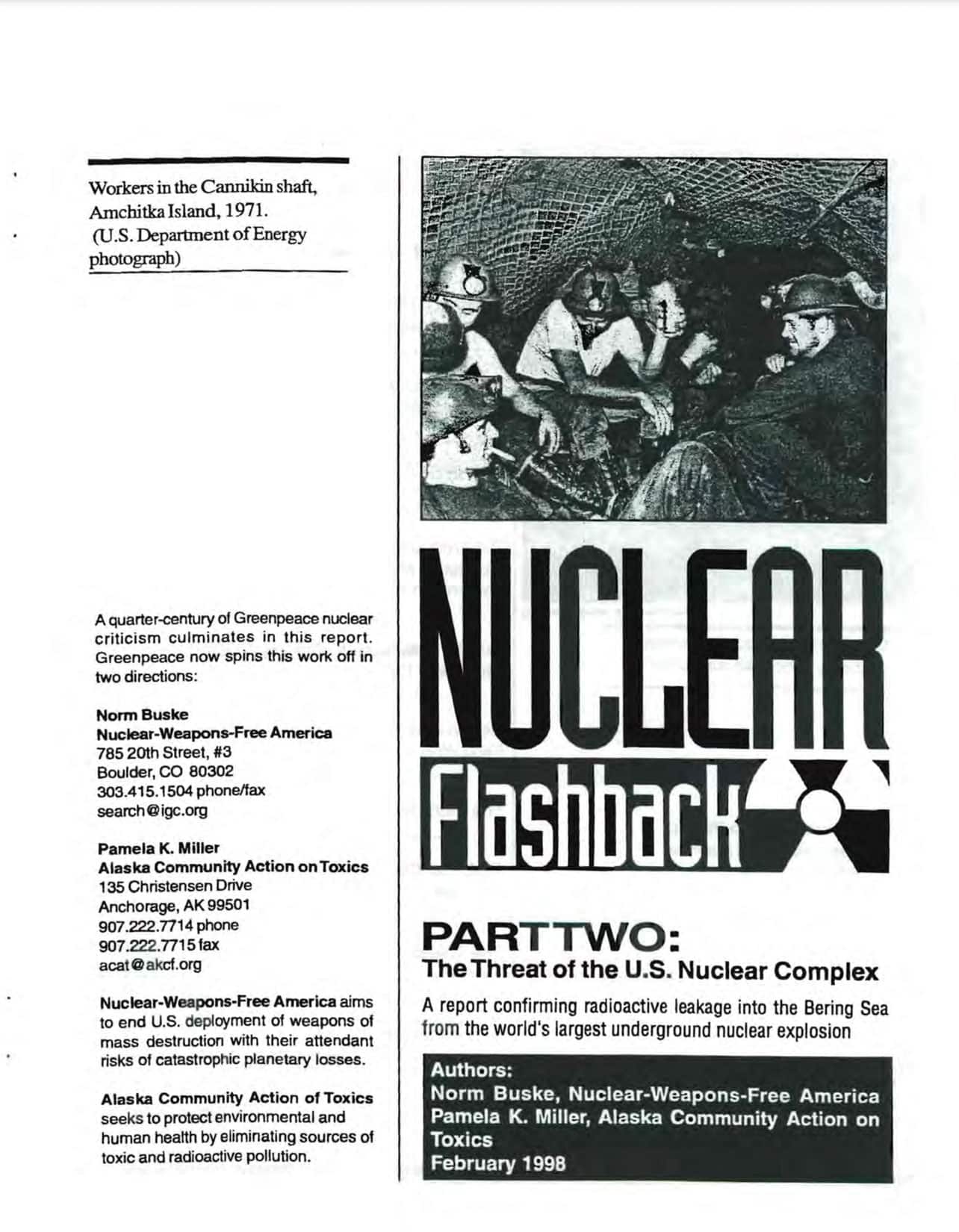 This report confirms radioactive leakage into the Bering Sea from the world’s largest underground nuclear explosion. Government data show americium-241 leaking from all three nuclear blast sites under Amchitka Island, Alaska. Americium-241 is a radionuclide with a 433-year half-life. It is produced by the decay of plutonium that fueled the bombs. The full extent of the leakage from the Amchitka nuclear blast sites is yet unknown.

The U.S. Department ofEnergy (DOE) undertook its own study in 1997, under public oversight, to check Greenpeace’s 1996 discovery of radioactive leakage. Since then, DOE continues to corrupt the scientific data and has no current completion schedule. Greenpeace scientists provided oversight of the 1997 DOE sampling program and subsequent analytical work.

This report blows the whistle on DOE’s cover-up of radioactive leakage from all three underground nuclear explosions detonated on Amchitka Island. 1997 DOE data confirm radioactive springs near the Cannikin and Long Shot blast sites, on the Bering Sea side of Amchitka Island. Clevenger Creek, flowing past the Milrow blast site into the Pacific Ocean, is also contaminated with americium-241. Government data reveal cobalt-60 traces in the radioactive “fingerprint.”

The Atomic Energy Commission (DOE’s predecessor) claimed that nuclear waste from the three Arnchitka detonations would be contained for hundreds, if not thousands, of years. Both the 1996 and 1997 investigations clearly reveal radioactive leakage.

NuclearFlashbackPart 2 chronicles problems encountered by independent scientists when results do not conform with the government’s vested interests. Norm Buske analyzed more than 1,600 pages of DOE’s own data to trace the government’s corruption of sample gathering, data management, violations of laboratory operating procedures, analyses, and subsequent reporting delays. Greenpeace’s unique public oversight role in this study provides a first -hand look at methods by which the Department ofEnergy disavows evidence of radioactive leakage at Amchitka. This is the “Amchitka example” of a system-wide problem at DOE.

The radioactive leakage from Amchitka is a harbinger of a deep and pervasive problem with the safety of the U.S. nuclear weapons arsenal. DOE’s technical failures call into question the agency’s ability to adequately manage the vast U.S. nuclear complex. Failures of government management of nuclear technology pose a clear and present danger to the American public.